It is not everyday that you stumble upon an obscure idiom and start wondering about its connotations. It happens once in while for me with two most possible outcomes - me falling head over heels to it and adopting it, or me disregarding it as naive and ditch it; there are no middle grounds.

Today, I stumbled upon this idiom, Dukes Mixture and fell in love with it instantly. It was not a love at first sight and happened after a thorough reconnaissance. And that makes the feeling most beautiful, and special.

It was used by a girl in her ‘about me’ category in a very popular website (Now, don’t indict me with charges on stalking!). I was wondering if it was a routine word and I indeed felt like a fool to not have even a vague idea about it. So I decided to look up for it and I got the following definition:

An odd combination of things, a strange mixture of items.

I did like the fact that the girl was using this seemingly obscure phrase to describe herself, but what amused me more was the history behind it. I went on making conjectures before coming across a brilliant article by William Safire on the New York Times, written about 30 years ago.

The article was written in 1983 and answered almost all of my questions. Also, I did a small cross check with some historic facts and was gratified to see that the explanation was pretty much accurate.

So let’s get right into it. Where does the real roots of Duke’s mixture lie? Anything related to the Archdukes of Austria? Nobility? Or any other obscure ‘duke’?

And the product, had a good role to play in giving a more macho image to smoking than did most of the advertising strategies that came after, including the Marlboro He-man. You should read it along the lines that before these campaigns, smoking was regarded as sissy and belonged to the punks and the losers in the lower end of the society. With no strings of heavy masculinity attached to it. Even when men of honor chose to smoke, the chose to do it in private rather than public.

The product that Duke marketed was the tobacco base for self rolled cigarettes. The product was served in a small white bag with a drawstring. It was advertised with cowboys on horseback rolling cigarettes with one hand!

An advertisement on the Duke's Mixture. Note the caption and the soldiers. 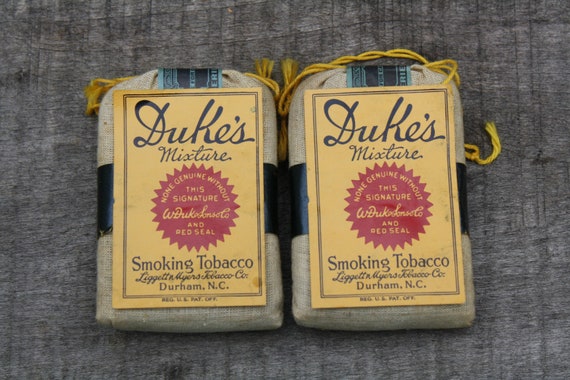 Another advertisement. This was originally a door push in a hotel! Duke, with his company, aggressively used such advertising methods to popularize the product. The product became so popular that it slowly slipped in to the popular jargon. And lately, the mixture of tobacco leaves and half processed tobacco came to represent a slapdash mixed bag of clutter and paraphernalia.

It also reminds me of the extent to which advertising based on branding have penetrated to our lives. Many of the words that we use now, apart from the ones with medieval origin, are rooted in successful campaigns in the past to propagate an idea or a product. The case is the same in United States, India or any other part of the world.

Nevertheless, there are a lot of words that occasionally slipped into the language just out of chance or some kind of nomadic interaction. These occasional advents have had their part in making English the most beautiful language we would ever know. She was wedded multiple times with the most exceptional ominum gatherum of mankind. And their interaction has made her even more beautiful. A lot different from a vision that the Victorians have had about her.

I remember a quote from our beloved Jose sir when I was in school.

English was born in England, Survived in US, Died in India, and was buried in Africa.

The quote may have a different origin, but when I heard it for the first time, it caught my imagination and thrusted me into contemplating about the diversity of the language - Of how much it must have evolved, the influence it would have had, and most importantly why am I studying it?

Later, I would find the answer. That English is a live language - with a life of its on. Though noble in upbringing, she broke the chains and spring deep into the world, getting involved, getting modified, being used and evolving into a new person altogether - A Duke’s mixture of all sorts!

She must have had many lovers, but she still entices me. So is a million others who sip on the sublime expressions of creativity engraved on the sands on time with her. I hope I get enough to ask her out. I believe she would grace me. She has done it before and would be happy to do it again, again, and again!

I don’t know if the girl from whom I got the phrase would have contemplated about the history of the phrase or that it could be used to describe English. But I am deeply thankful to her for lighting up the spark that lead me to a string of thoughts that would consume an entire afternoon - A cozy, rainy, caffeine enriched afternoon powered on Green energy.