Life is important, of course. But what comes after death?

I am not interested in the fate that may befall on my cells, tissues or organs that are impressed upon the soil, fire or scavengers. I can’t really predict the circumstances of my death.

I am more concerned about the thoughts, ideas and other peculiarities that inhabit by psychological space. Sure, my physiology supports this realm of ideas. But it is much more just than that.

I built this kingdom by my own perseverance and I am under an oath to protect it and make it prosper till the end of my days. I built this fantastic kingdom, thanks to the generous help that I received from this ecosystem outside my body boundaries.

Innumerable books, sages I met on Internet and humans who impressed various characteristics in me through direct or indirect interaction… the list is long.

I often think about a thought that has come to inhabit me. Where did it originate from? What all perils have it traversed before it got into me? Now that it is inside, my machinery work on it till it is polished (perhaps damage the edges or distort it).

And how much distance it will traverse after it has left me?

I see myself immersed in a constantly churning universe of ideas that’s mediated by my consciousness. My input devices are of course biased - selection, heuristic, survivorship and many more biases operate in many levels before I get to ‘process’ this information.

In fact, these layers of distortion are part of my data processing infrastructure. They are the product of a unique history - my own history - which is a function of my times, geography, society and what not.

As much as I wish to pursue knowledge, I try to skim through the material and handpick the stuff that could stand up the scrutiny of a ‘standing committee’ that I have instituted inside myself.

These fierce lords of logic that exist within me are categorical in filtering knowledge and keeping up the highest standards of excellence.

But I am perpetually disappointed with them.

This motivates them to be more rigorous, more scathing in their criticism. This is the kind of system I want to institute; and it’s always under construction. This also reflects the kind of society that I want to live in.

A place where there are checks and balances and respect to expertise. Not pompous oaths of allegiance and moral high grounds, but solid resolve to exact precision out of chaos.

My death is a unique event, but nothing as spectacular as I would expect in my ego centric universe. The ecosystem would simply recycle me back into its limited resource base.

So economy is at the core of existence. I despise wastefulness because I am well aware of the resource crunch that’s plaguing my civilisation. I identify closely with the spirit of ‘Mottainai’ that’s an hallmark of the Japanese division of our civilisation.

I am resolved to fight the arrogance of the 20% of world’s population which believes that it is ethical to spend 80% of world’s resources for their own welfare.

So you see, the trees I plant, the ideas I disseminate, the speeches that I give and the people I love - all of these will be around long after I am gone.

That’s a form of continuity that I appreciate. To make sense of it, I look at the crazy ideas that inhabit many areas of my mind’s realm. Some of them were born yesterday. Some of them have traversed bloody revolutions and killed many millions to reach here.

They will travel much more, they are always dangerous. But I am not frightened by them. I am trying to tame them and learn from them. I know that the needs of my time and my purpose are different. They have to evolve.

To private or public profit, these ideas are to be deployed. They replicate and propagate, sometimes tame, sometimes going awry. But there is always a risk. A free farm of ideas is our best insurance to future. The risks that come with it, we will have to mitigate and optimise.

This dangerous business of course, could be wished away and I could sink to the comfort of quotidian bliss. But I choose to swim as long as my fins could hold me up. This is mere idiosyncrasy; I am none special.

Stoicism taught me to endure. Epicureans taught me to indulge. But between them and other thousand splendid suns of philosophy, I have this moment - my present. It has to be savoured.

To nurture an ambition and a long term plan is what my mind aspire for. To see the bigger picture and justify my existence. I am convinced that I need an aim and well defined set of rewards to guage my progress, till death comes and I am thrown out of the game.

This is the natural progression of events. Here, I identify myself with that general who allows his soldiers the luxury of an afterlife with eternal feasting, but is a sceptic himself.

That general who betrays a war mongerer in favour of peace and prosperity to general populace - however distant and utopian it might seem. For all the realism around me, I am an idealist to the core. Purpose of my learnings is to strike an healthy balance.

I wouldn’t want to sacrifice success at the altars of lofty ideals. So my education isn’t complete. It has to go on. If I can’t alleviate pain and suffering even in my immediate surroundings, what a waste of my efforts that would be!

That’s my philosophy as well, to ameliorate the sufferings around me, as much as I can. Material or spiritual or whatever. I am no one special. I expect everyone to do the same.

When I at it, I believe that death will become just another event, something distant and foreign. But it feels deeply personal as well. That marks a shift in my being.

But the continuity that we have instituted and woven ourselves into - this stream of life/consciousness - flows unabated. An appreciation of bigger picture is necessary to internalise this and act accordingly.

Looking at mythology from this perspective can be greatly uplifting. The need for continuity and existence of mighty, collosal structures that hold our society together reiterated and ‘revealed’ to these wise men and women via their wisdom. 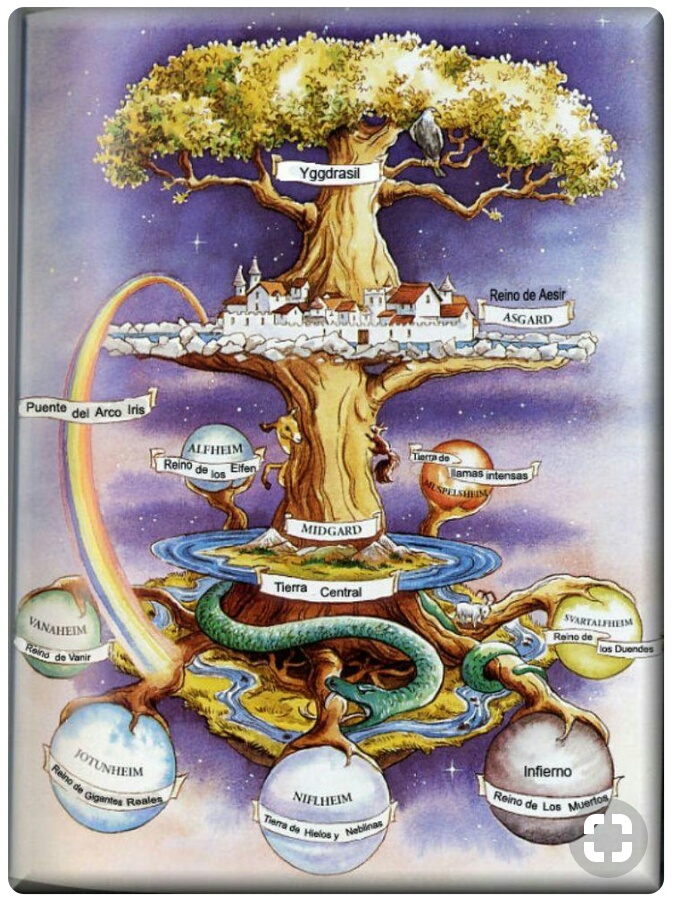 Yggdrasil, the tree of Life that encompasses the whole universe according to Norse mythology.

This yggdrasil, along with the Sidrat al-Muntaha (the lote tree) mentioned by Prophet Mohammed where the ‘knowledge stops’, comes back to me in my dreams often.

Sidrat al-Muntaha[1] is where the knowledge stops. Beyond it is the vast uncharted waters of the universe. This is traversed only by the god and his prophet. 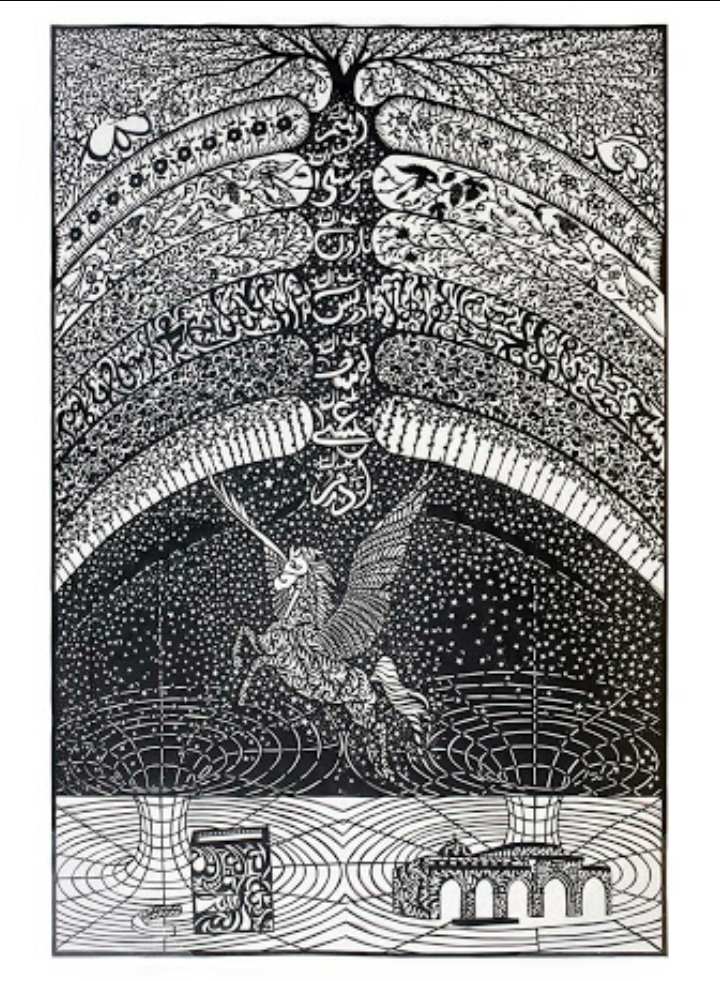 An illustration prophet of Mohammed’s journey on the night of Mira’j. Look how he bypasses colossal distances and then culminate the journey at Sidrat al-Muntaha. What happens beyond, is not for us mortals to know. But this is in grand scales and long times. An insightful reader would see how these ideals are internalised in Islamic architecture and art, especially the arabesques that coil around and fit in together creating ‘infinities’ that inspired a learned medieval Muslim mind. Look at the drawings of MC Escher to find similar ‘Infinite’ stuff that coils back to ourselves.

This idea of grandeur and intimidating uncertainty is humbling. Just like the Sidrat al-Muntaha that marks the end of an enterprising journey, I will meet my death somewhere.

More than the destination, what matters more is the journey. No matter how far we go, there’s an end waiting for us. But this needn’t be fatalistic. Fatalism is antithetical to continuity and the spirit of civilisation.

From Confucian ideals of stability and civilization to the ‘entrepreneurial’ spirit of modern capitalism, we see the stream flowing on. The fuzzy line between ideologies and religion keeps throwing this againt and again - a grand structure to which you are an integral part. Real or imaginary this structure may be, the continuity is indeed real.

When I look at the great religions, I see this dedication and scepticism of great men and women who infused these ideals into folklore, myths and religious dogmas. I can’t be disrespecting them from this vantage point. That’d amount to myopia and I am no fool to commit that.

So you see, scaling this up to civilisational sizes or even at a personal level, I revel in this stream of continuity that define life. The grand scales that mythology points to is in fact the bigger picture of the world that we should be seeing.

Space exploration and not nuclear submarines. Frontier medicine and not trenches with AI enabled mass murders. I have well defined priorities.

Death is an expression of Life from within. A characteristic, a blip in the greater flow of things and events. What matters more is the journey itself and not the supposed end and beyond.

That’s the gist of my learnings so far. 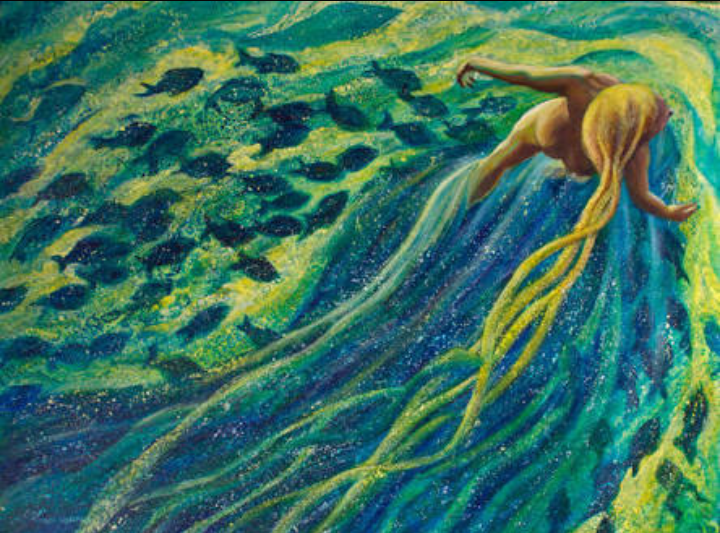